The 76ers have lost two straight games, including a heartbreaking 121-120 defeat at the hands of the Minnesota Timberwolves on Saturday.

Meanwhile, the Magic are mired in a six-game losing streak and most recently were defeated 105-92 by the Cleveland Cavaliers.

On the Magic side

Orlando has been led by guard Cole Anthony who is averaging 19.6 points per game and 5.9 assists per game this season.

However, Anthony has been out since November 20th with a sprained right ankle which is conveniently right around when the Magic’s current losing streak began.

The Magic will need other players to step up on Monday if they have any shot of beating Philadelphia without Anthony.

Young Wendell Carter Jr. has been productive this year for Orlando. The center is averaging 13.3 points per game to go along with a team-leading 9.5 rebounds per contest.

As a team, the Magic are near the bottom of almost every statistical category. However, the one stat where they are in the top half of the league is blocked shots.

Orlando ranks 14th in league with 4.8 blocks per game. Leading the way in that department is big man Mo Bamba who is averaging two swats per game.

On the 76ers side

The 76ers have had an odd season. On the one hand, they have a plentiful amount of talent and are expected to rebound and make a postseason run.

However, they have had extreme trouble staying healthy, which is even more of a problem with Ben Simmons still not playing.

Fortunately for Philadelphia, Joel Embiid returned to the lineup on Saturday and looked incredible with 42 points and 14 rebounds. Embiid leads Philly with 23.5 points per game. He is also averaging ten rebounds and 1.5 blocks per contest.

The 76ers have a balanced scoring attack with seven players averaging at least ten or more points.

Tyrese Maxey has been an impressive replacement for Simmons, as the young guard leads the team with 4.8 assists per game to go along with 18.5 points per game.

The 76ers also rank 4th in the NBA in turnovers with just 12 per game.

The 76ers have Embiid back and could be on the verge of getting hot. This is a team with loads of talent, and as long as their superstar center is on the floor, they should be okay moving forward.

With Cole Anthony expected to miss Monday’s game, Philadelphia should roll over the Magic in this contest. While most sportsbooks have not yet released their odds for this matchup, expect the 76ers to earn the victory at home against Orlando.

Bet on the 76ers in this game. If you love sports betting subscribe to our Insiders Betting Digest mailing list and receive free betting analysis and picks weekly. 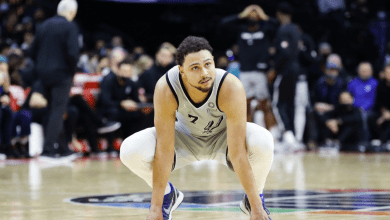