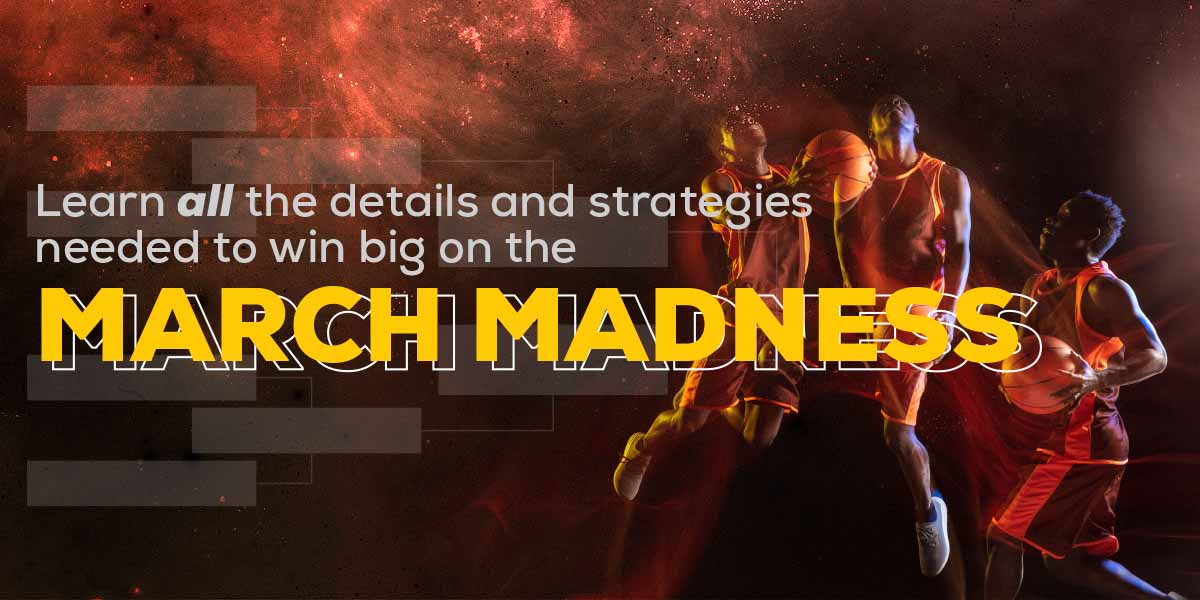 Road to the National Championship Dates for Betting on March Madness

March Madness is one of the most entertaining and wagered-on events in the sports calendar year. If you are betting on March Madness make sure you know the tournament well. That’s why for those of you who are unaware of how this goes, we will briefly explain it to you here.

March Madness is a 68-team NCAA Division I Men’s and Women’s Basketball Tournament that occurs for three weekends throughout the month of March to crown which program is that year’s National Champion.

In order to qualify for March Madness, teams either need to win their conference’s tournament to gain one of the 32 automatic bid into the tournament or wait until Selection Sunday, a day in which the NCAA Tournament Selection Committee announces which programs will be part of that year’s tournament as an at-large bid based on strength of schedule, strength of wins, and a lot of other factors that are sometimes controversial. Eight “bubble” teams will also compete in the “First Four” games with the winner of those games entering the tournament as well.

The tournament itself lasts through most of the month of March and into April. The National Champion will need to win six consecutive games in a single-elimination tournament (seven if they were forced to compete in the First Four).

The bracket consists of four regions dividing teams evenly amongst the four based on seeding. In the first round of the bracket, the top-ranked team in the region battles against the 16th-ranked team, #2 against #15, #3 against #14, and so on with the winners advancing to the next round.

There are a good amount of upsets that happen. If a lower-ranked seed wins a few games, they tend to be referred to as a “Cinderella” team. Once the tournament gets to the Round of 16, rounds begin to get named as the Sweet 16, Elite 8, Final Four, and National Championship, respectively.

One of the most common types of March Madness bets that a typical bettor will make throughout March Madness is a single-game wager, where they are just focused on one game. For this bet, you got all our free betting picks, betting analysis, and predictions. This includes point spreads, moneyline, over/under bets, and specific player props throughout the game itself. Here comes where we

There are a lot of team-oriented futures bets that can be placed about March Madness throughout the collegiate basketball season, such as betting on who will end up winning the National Championship and which team will win their conference tournament to receive an automatic bid.

Despite there being more than double the amount of NCAAB teams that qualify for this tournament than are on the professional level, there are far fewer things to wager on as futures. One typical wager is to bet on who you believe the NCAA Most Outstanding Player will be for the tournament, which is the most prestigious individual award for a player throughout March Madness.

Betting on March Madness is unique because you can bet on which program will win the National Championship as a futures bet, but this is a grand event over the course of several weeks. Betting with a futures wager allows you to place a wager at any point throughout the season and get pretty solid odds but be careful as you can place a wager on a program earlier in the season and they can fail to make the tournament entirely.

Once the bracket is set, you’re able to wager on the individual games where you can bet on point spreads. In that scenario, a handicap is added in order to make it an even playing field as well as on the moneyline, over/unders, and specific prop bets as well.

The odds for betting on March Madness are very similar no matter the major betting market that you use. Most spreads are going to be around -110 to ensure that they are as even as possible on both sides. Sportsbooks will adjust the spread until they get roughly half the betting action on the favorite to win and half on the underdog to cover.

Because of those differences in betting action, it’s important to shop around and try to find the best odds for the bets that you are trying to make for each event. While the odds are usually pretty close to the same, those small differences add up over time.

Stats in college basketball are often used to talk about why you should bet one side over another and help shed some light on the current crops of players’ and teams’ performance. Bettors need to make sure the context fits the stats because these programs do not play balanced schedules.

Looking at perennial powerhouses like UCLA and Duke can be tricky as they schedule some lower-tier competition at times and could inflate their stats for March Madness if they win via a blowout. That will inflate how dominant they will look in terms of their per-game numbers with crooked numbers on both sides averaging into their totals.

Just like in basketball, bettors should attempt to look deeper into the numbers and look at smaller chunks of numbers instead of the entire season. Looking at stats against teams over .500 or in conference play could be a better factor than the entirety of the regular season. Possessions per game are usually a good indicator of a team’s scoring potential, as more possessions tend to lead to more points.

Betting trends are commonly used by bettors in an attempt to get an edge by finding something that happened over time and quantifying it. You may hear someone say that “UCLA is 10-1 against the spread in their last 11 neutral site games” and believe that is something to get behind but that is just information to help guide you instead of being the end-all-be-all.

It is critical to remember that in NCAA Division I Basketball, each player has a maximum of four years of eligibility (though in some cases with injuries or transfers, players can get exemptions) and the best players are typically leaving after their first season in an attempt to jump to the NBA or a different professional league.

Another thing to consider is college basketball coaches can switch schools from time to time, and rumors about coaches from the smaller schools leaving for a bigger program tend to start swirling around tournament time. When there’s tension about coach security, teams can fall apart.

Trends in collegiate sports as a whole can be a little tricky as the sample size needs to be small in order to talk about the current crop of players and if you go too far out, it is not focusing on any of the players (and sometimes the coaching staff) of that program. Bettors need to use trends as a complimentary piece when looking at bets and not as a supplemental piece.

How to Bet March Madness

In order to make the most bang for your buck, a bettor must realize that there are a variety of sportsbooks out there and scavenge each one in order to find the best odds. Doing this will save you money if your bets fall short or make extra money on wagers that win, making you more profitable in the long run.

From there, projecting which teams have the best chance of pulling off an upset is critical because there is always a team or two that wins a few games that many people believe is a one-and-done program in the tournament. Projecting the final score based on different factors such as the last few games or how they performed against similar opponents can help you figure that out. If you find a discrepancy that seems to be a value, then bet on that.

The most important thing to do in all sports betting strategies is having bankroll management. Bettors should use a certain percentage or dollar amount on each bet instead of throwing all of it at one bet. This helps reduce the chance of things going wrong and makes sure that you win over the long haul instead of constantly depositing more money into your bankroll.

As this information was useful for you don’t forget to stay tuned to all our Insiders Betting Digest Betting Picks and Sports Betting Information. Follow us on Twitter as @InsidersBetDig.

Is it legal to bet on March Madness?

This depends on which state or country a bettor is located in, as some regions have legalized sports betting while others have not. Make sure to check the specific laws of your state or country before attempting to place a bet.

How do I bet on March Madness?

One key to wagering on March Madness is to not be afraid of the big odds as there are a lot of uneven matchups in the first couple of rounds due to seeding.

When can I bet on March Madness?

You are able to bet on March Madness games once the bracket is revealed on a single-game basis but can bet year-round on the National Championship and other future bets.

How does the point spread for games work?

The sportsbooks will determine a handicap to make the game as even as possible and if the bettor bets on the favorite, they will need to win by that number of points while the underdog can lose by less than the points and still cash out a winning ticket.

How does the over/under for games work?

Sportsbooks will set what they believe will be scored when you combine both teams points at the conclusion of the game. Bettors will determine if the scores will add up above that number or below it in order to have a successful bet.

Which team is going to win March Madness?

This is going to change depending on the season due to a multitude of factors including changes in the program, schedule, and injuries

What is the best sportsbook to bet on March Madness?

This is going to differ depending on what you value from a sportsbook as they offer varying speeds, different interfaces, changing promotions, and different odds depending on which you choose.

How do I bet on March Madness?

The key to betting on March Madness is to identify the difference between the two teams and to search for the underdog that will upset the power team to get maximum value.

What is the best way to make money betting on March Madness?

Making sure to use multiple sportsbooks and diving into your projections compared to the sportsbooks and their odds could be one way but it all matters where you bet and the odds for each wager.